The Truth and Reconciliation – Straight Arrow Awards was created in 2019, while Michael Sima, was a B.Ed student at the University of Prince Edward Island. For his final assignment, he submitted a proposal to David Varis, now an Assistant Professor of Indigenous Knowledge, Education, Research and Applied Supplied who helped connect and advocate for the award along with 2019 President and CEO Emma Drake, and followed by Tolulope Oginni, Brian Affouman, and Samantha MacLean. The award was originally drafted as The Truth and Reconciliation Student “Calls to Action” Award.

In 2021 Michael Sima received the Acorn Press Marie Coyoteblanc Indigenous Writing Award from the  Island Literary Awards for the Winning Book: The Chosen: Straight Arrow – Ann Without An E. The book is recognized as Canada’s first Indigenous Truth and Reconciliation Superheroes – The Straight Arrows. The spirit of the book is to inspire everyday local Indigenous and Ally heroes that move reconciliation and our communities forward together.

September 2021 the first Truth and Reconciliation Awards for an Indigenous and Ally student in Canada happened in PEI and were awarded to Nathan Sark (Indigenous) and Sarah Freeburn (Ally).

In 2022 Shaun Beyale (Navajo) an artist from Marvel Voice – Heritage #1 created the Indigenous superhero team from the book. The characters from left to right are Spirit Star, Condor Eagle, Raging (Rage) Star, and Sunset Crow. 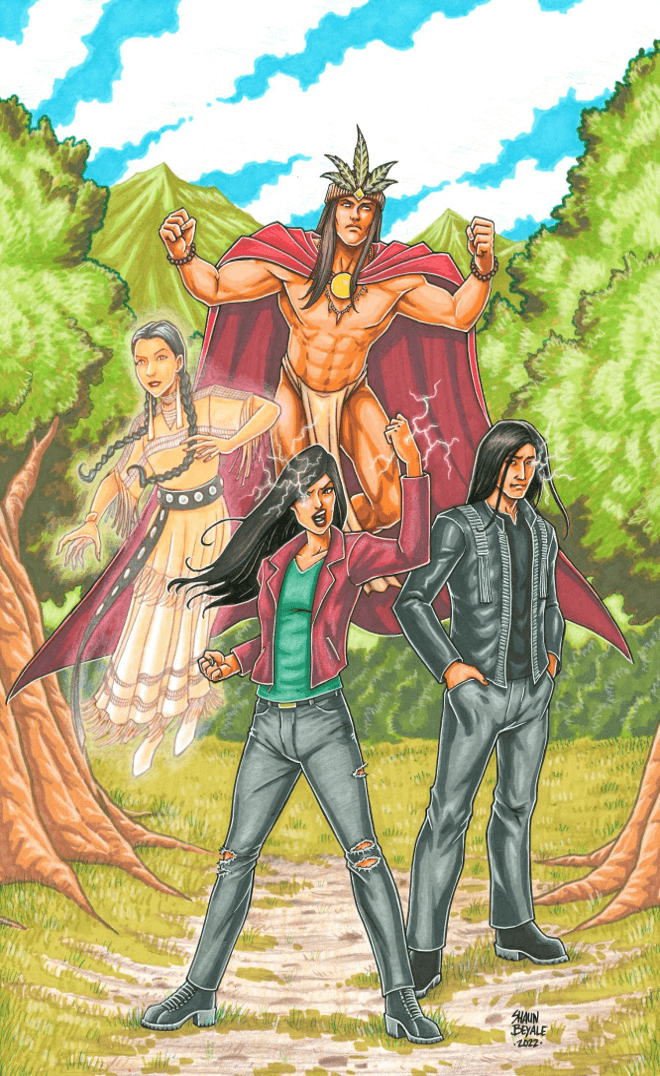 In the 1950’s Straight Arrow reversed the trend of the Indigenous SideKick from the Lone Ranger / Tonto and focused on a Comanche hero with his own comic book title – Straight Arrow. His sidekick was an Ally, a  non-Indigenous gold miner named Packy McCloud who raised Straight Arrow when he lost his family as a child.

Timeline: The application period is open year-round and is due September 25, 2022. The Award and Presentation happen during the final week of September. This period is known as Truth and Reconciliation week in Canada. The award presentation is scheduled for September 28, 2022.

Purpose: This scholarship has its origins in Canada, from the Truth and Reconciliation Commission (TRC). The TRC calls to action addressed the ongoing impact of Residential Schools on survivors and their families. It also provided a path for the government and Indigenous and non-Indigenous communities in to create a joint vision of reconciliation.

In June 2021, a bill creating a statutory holiday on September 30 to commemorate the tragic legacy of residential schools in Canada received royal assent after passing unanimously in the Senate. The objective is to create a chance for Canadians to learn about and reflect on a dark chapter in their country’s history and to commemorate the survivors, their families, and their communities, as called for by the Truth and Reconciliation Commission and Indigenous leaders.

Over the course of more than 100 years, some 150,000 Indigenous children were ripped from their families and forced to attend church-run residential schools, where many suffered physical and sexual abuse, malnutrition, and neglect. More than 4,000 are believed to have died.

The date of September 30th is also Orange Shirt Day, a day that has been observed since 2013 in memory of a piece of clothing then-six-year-old Phyllis Webstad had taken from her on her first day at a residential school in 1973.

Education: While educating on Residential Schools, the Awards also promote education and awareness on the discovery of unmarked graves and survivors from Indian Day Schools as well as other schools.  The day and website are intended to educate and remind Canadians about the history of these schools, honor the victims and celebrate the survivors.

Eligible to attend the University of Prince Edward Island

Be a member of a First Nation, Congress of Aboriginal Peoples Affiliate, Metis Nation, or Inuit beneficiary

Eligible to attend the University of Prince Edward Island

Participated in reconciliation with Indigenous peoples.

BIPOC, LGBTQTI+ peoples with learning disabilities are all encouraged to apply who are also Ally’s supporting Truth and Reconciliation.

Please provide the following, the University you are applying from, Your Name, Email, Phone # and Student #.

Note: An Indigenous person who is a member of BIPOC can apply as an Ally as well, however, must also include in their 500-word essay their support and promotion of BIPOC.

Electronically uploaded essay that answers the question below for both Indigenous and Ally:

What is your commitment to promoting and protecting Indigenous education, culture, and values in a maximum of the 500-word essay?
Due: September 25, 2022

Two 1,000.00 scholarships per year are issued each year to two candidates. One candidate will be an Indigenous candidate and the other will be an Ally. Each student must resubmit an application every year, regardless if they were awarded a scholarship the previous year.